Fifty years ago I was with my friend Charlene in front of a hotel on Michigan Avenue, clean-cut with a coat and tie. We were arguing with an alternative delegate to the Democratic Convention from New Jersey. The street in front of us was filled with protesters.

We had been among the crowd that tried earlier to conduct a peaceful, well-organized march starting in Grant Park. But the police had refused and tried to disperse the crowd with tear gas. The crowd did not disperse and eventually flowed onto Michigan avenue, where it remained. Chanting and yelling and closing the street, but otherwise not bothering anything.

Then the police decided they were going to clear the street through whatever means and started to club and mace protesters and, indeed, anyone in sight. The alternative delegate scurried into the hotel, but the hotel’s security would not let us in because we weren’t registered. Charlene and I headed down a side-street to get away from the police—who were now clubbing people wildly and indiscriminately. Suddenly police came at us from all sides. I was clubbed in the head and ducked away from two other swings at me. Charlene wasn’t hit—just pushed around. The Mobilization Committee carted me off to Billings Hospital (as the University of Chicago Medical Center was then known) to get stitched up. 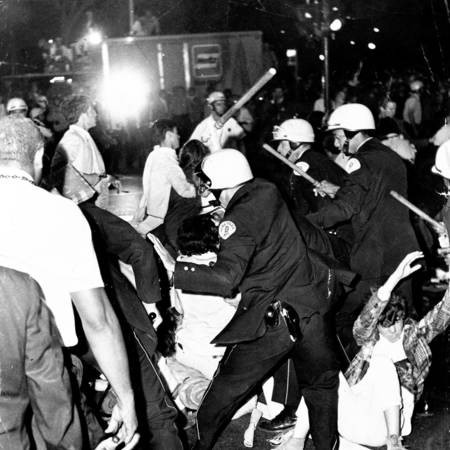 I was shocked, but not surprised. If I had been overly worried, I wouldn’t have been there. I knew that the organizers of various protests anticipated, perhaps hoped for, police over-reaction to whatever happened. In this case, the over-reaction was over the top and it was available for the whole world to watch.

When I returned home to St. Louis, I wrote up the events of that week and sent a ditto (people my age will remember the purple print and funky smell) to many friends. It was like a Facebook for the rotary phone era. I wrote this note because I sensed then that this was a serious breaking of the threads holding the country. The riots, protests and descension of the previous years had all been building to this point.

I wanted to create a record of how events unfolded at my street level. I figured this would become another particular in the bill of goods against all the protesters, particularly my generation, for destroying the country.

My premonition was correct. As it turned out. the Chicago convention was the crossing of the “law and order” Rubicon. “Law and order” would become the watchword for large parts of the country who wanted to stuff everything about the Sixties back into the box from which it sprang. As if that could be accomplished with tear gas and truncheons.

In retrospect, I wonder how much of that was a real belief that the clock could be turned back and how much was simply a desire to exact revenge. The more I learn about the astonishing cruelty that whites could inflict on black people because “they didn’t know their place”, the more I wonder how many of the “law and order” urges were simply a desire to spank unruly children by whatever means necessary.

This “law and order” mantra contributed significantly to the election that year of Richard Nixon. Nixon’s election was part reflection of the growing cultural divide in the country—but also a significant cause. Instead of trying to bring the nation together, his opportunistic politics realigned the political structure and exploited these cultural gaps. Subsequent events hardened these divides as certain politicians built on the gaps and nurtured them to the point where today this divide creates a distinct anxiety about the future of American democracy.

One should be careful about over-ascribing the importance of specific events. History isn’t neat. Different trend lines get broken all the time. There were all kinds of things changing in the Sixties that weren’t going to get unchanged. And there were trends that started much earlier and would continue longer. Still, if one is looking for a single point at which all the disparate impacts of the Sixties came together with one mighty rent in the society, it would be that night in Chicago.

Reflecting back on all this, people might wonder whether all those protesters in Chicago—and elsewhere in those years—did the right thing.

Speaking for myself, and a relatively large group of friends, the answer is unequivocally “Yes”. Not that any of us anticipated, let alone hoped for, a cultural rift that won’t resolve. In fact, we resolutely believed this was a step toward reconciling the divides. Perhaps uncomfortable in the short run, but something that would be well received in the longer arc of history.

How it would ultimately turn out was something we couldn’t know then. In the clear and present of that moment, however, the choice was to acquiesce or to protest. There were all kinds of protests, and some were less offensive to the general population than others. But make no mistake. They all stemmed from the same basic question—to accept the existing circumstances or to oppose? From our point of view to accept the old order of blacks in their place, napalm in Vietnam and women in the kitchen was simply wrong. What we did was what we could—because it was a moral imperative to do something.

After the events of the Sixties, there was no going back for America. Although back to what isn’t clear. It’s not as if there were some halcyon days when everything in America was great and the protests ruined it. Many things were good, but many things were not. Ignoring the problems would have been squandering the amazing advantages America had given us, selling out progress to preserve our own place.

Just as, lost in the collective memory of the Chicago convention, is the irony that it was the police who had rioted, not the protesters.

As you might guess, this post is based on material in my book, You Must Choose Now: A Journey Through the Sixties. The book contains a longer description of what happened in Chicago on August 28, 1968, including an abbreviated version of what I wrote then and distributed by dittograph. The book is available in both e-format and paperback from pretty much wherever you usually get books, including Amazon and Barnes & Noble. (For those of you who already reading the book, many thanks. I hope you are finding it interesting, but please let me know what you think. I must, however, note that I have discovered another downside of self-publishing: even the purchased proof-reading was not as good as I had anticipated. Changes are in progress, so be forgiving.)

2 thoughts on “Looking Back to the 1968 Chicago Convention”