It is impossible to write this week about anything other than the family immigration issue.  I am not going to address the issue specifically, others are doing a fine job on that, but try to step back a little. What have we learned from this? 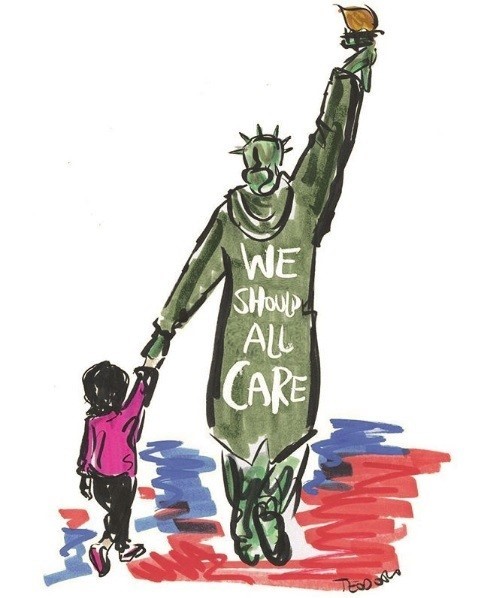 Everything about the last several weeks—and I haven’t even addressed foreign affairs—supports the notion that the nation is facing an existential crisis of democracy. I don’t think it’s hyperbolic to say the future of democracy in America depends on getting Trump out of office. As a theoretical matter, it should be possible to limit the damage by getting Republicans to actually show some spine or by winning one or both houses of Congress to frustrate him legislatively. Per above, I am not optimistic about the Republicans showing spine. If Trump can tamp down some of his worst instincts for the next couple of months, the Republicans are likely to see opposing Trump as giving the election to Democrats. Hoping Trump gives free rein to his worse instincts is too cynical even for me, not to mention the dangerous impacts that could have.

Winning at least one house of Congress in November is much more likely. But, on the off chance you haven’t noticed, Trump doesn’t care a whit about legislation. He likes the signing ceremonies, but neither the process nor the substance interests him. He cares about using his position to cultivate the adulation of his base and enhance his sense of power. Winning the House, or the House and Senate, won’t change that. It might even put the Democrats in the position of having to defend in 2020 the fact that even after winning in Congress, they couldn’t get anything done. You can be sure that anything that goes wrong—a bad economic report, a hurricane in Florida or a traffic jam in LA—will be blamed on the Democrats by Trump. Over and over. Still we have to do what we can do. It is the challenge of the moment. And perhaps it will suggest to traditional Republicans that getting too close to Trump threatens their seat as much as opposing him.

The real issue is 2020. Democrats must replace Trump—assuming he’s running—and win back some statehouses so that they are not again massacred in the census re-alignment.  (Actually, some of the latter should be a concern in 2018 where states elect governors who will preside over the redistricting.)

To succeed in 2020 Democrats will need some combination of energizing their base, expanding it, focusing on economic issues and underlining the dangers of Trump.

How this message will get hammered into a campaign is less something that will be decided by any party hierarchy. It will be decided primarily by the choices individual candidates make in the scrum of the primary season. (Unfortunately, this process is inevitably distorted by the penchant of both the media and voters to reduce the complex issues of 2020 America to some caricatures.)

Accordingly, my thoughts on the matter aren’t very important. But for what it’s worth, I think the events of the last week suggest that the presentation of a different idea of America, one that unites around a compassionate and shared future, might be stronger than putting all our hopes on an economic populous campaign. The former may lead to some slippage in Democratic base turn-out—particularly if the primary creates very strong passions for economic populism. But it may enable more sometime-Republicans to set aside doubts and vote against Trump, which has to be the overriding concern.

Of course, I don’t know what will happen. All I can say for sure is that I get freaked-out thinking about the German election in 1930.  The German Social Democrat and Labor/Communist parties between them had 60% of the vote. But they couldn’t settle their differences with each other and Hitler became chancellor.