This is the last of three posts that were in specific reaction to the movie Hell and High Water.  This one, written after the election, suggests some directions for turning these reactions into strategy.

By the way, a reader of the last post observed that the movie had no partisan connection.  I absolutely agree.  I would doubt concepts like “Democrat” or “Republican” would ever appear in the minds of any of the movie’s characters.  I use these concepts because (a) they are useful labels for collections of ideas and values that differentiate, even if somewhat messily; and (b) while both parties are in profound disarray, I think it more likely rearrangement will happen within the construct of these parties—rather than the emergence of a new party, as just happened in France.

Anyway, on with the show.

This post is not about the last election.  (Among other things, that’s over.)  The fact that Hilary lost is a very bad thing.  But even if she had won, she’d have faced a hostile Congress and would been limited in what she could accomplish.  Most likely it would be a series of partial accomplishments—like Obama—but not enough to significantly change the pre-existing order.  Four years from now a lot of people would be blaming her for what she didn’t get accomplished.  What is necessary is something to decisively break the current deadlock.  Intermediate victories should be taken wherever possible, but we must not lose sight of the goal.

The road to a gridlock-breaking majority, something more than 55% of the electorate, runs through the White Working Class—WWC, white people without a college education–who voted for Trump.  There simply is no other large enough pool of voters.  Besides, they have been getting a raw deal and deserve a real champion.  A great many of these folks are stuck on issues—abortion, race, gay rights, guns—that immunize them to anything Democrats have to say.  But, we can break 55% if we can peel off 10 to 15% of the WWC who voted for Trump.  This is possible, albeit not easy.  It’s not like Trump/Republicans are going to improve the lives of the WWC and the Dems are committed to ideas that could improve their lives.  The issue is how we include the WWC without losing our current voters or our values.  Current Democratic voters aren’t going to become Republicans, at least as currently constructed, but they can go to 3rd party candidates or simply stay home.

I think the road to recruiting a share of WWC votes requires at least three critical steps. 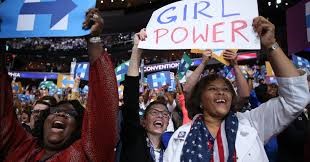 These are tall orders.  Truly steering between hell and high water.  But they aren’t impossible and they include a lot of what Democrats have traditionally stood for.  We just need to polish them up and reintegrate them in our thought.  This is more than adjusting “messaging”.  We need to be explicit that we recognize the issues and take steps to address them—but authentically and consistently.  We also need to go all out to attack gerrymandering.  If the Republicans are able to gerrymander after the 2020 census like they did last time, it will be many years before we can get out of the mess.

We have to stay focused and we have to remember we need 55% of the vote at every level.  Every level.  Marching will not be enough.  Change needs canvassing.