I am still no expert on trade policy, but I have found the spinning out of the recent NAFTA discussions fascinating. You may have already forgotten about them because issues with China have taken center-stage in anything about trade that could be heard over the Kavanaugh furor. But, as will be discussed below, expect NAFTA to return.

First, repeating a mantra from earlier posts on the topic, there is simply no such thing as completely free trade. All trade happens under some rules. So simply incanting “free trade” doesn’t really shed much light on the full range of discussion. This is important because the stickiest points in the current NAFTA discussion are not around tariffs per se, but around the rules under which tariffs stay low—not that you could tell that from most of the media coverage, which continues to portray this as a cartoon contest between free trade and protectionism, with little coverage of the actual issues at stake.

To review the bidding on NAFTA: As it now stands, the United States and Mexico have reached a tentative bi-lateral trade agreement. Canada has participated in talks about some of the provisions, but is not part of the Mexico-America agreement. There is a wide range of opinion as to what happens with NAFTA if Canada does not come to an agreement with the other two parties. But the procedural rules governing Fast-Track approval require the publication of actual text by October 1 if an agreement is to be signed with Mexico before its new president comes to office. So the next week will be telling.

It is worth setting aside speculation on Canada and focusing on the Mexico-America proposed agreement because it provides an illuminating case study. As it now stands there are five major elements of the deal. The agreement would:

While I am sure I don’t understand all the fine print in this agreement, what is striking to me is that none of these provisions seem to fit into the narrative structure, advanced by the business community, that dismisses any attempt to modify trade rules as anti ”free-trade.” The Business Roundtable complained “that today’s announcement might signal not an improvement, but rather a step backward by requiring a sunset provision, weakening investment protections and constraining access to dispute settlement procedures.”

Rather, it seems to me, these provisions could best be characterized as an attempt to better balance the benefits from trade between the people of the two countries and the corporation owners, whom the previous provisions favored. 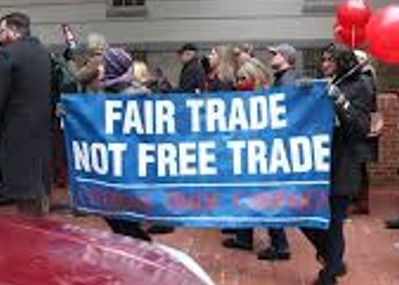 Not surprisingly, unions tend to support the new provisions. Unions do, however, caution that the agreement continues to lack sufficient teeth around enforcement, and, in general, there are plenty of things progressives would want from a trade deal that are not contained here. But there is general sentiment this a step in the right direction.

In any event, the opposition of the business community and the absence of Canada in the agreement make it unlikely that Congress will move quickly on this issue, which would probably push any ratification past the midterm and past the installation of Andres Manuel Lopez Obrador as the new president of Mexico. Thus, adoption of these provisions, indeed the entire future of NAFTA, remains uncertain.

Still, this proposed agreement is interesting because support does not fall along party lines. While Trump’s base, like Trump, is instinctively protectionist, this is totally divergent from the Republican party’s established position, which has been strongly “free trade” for the last 30 years. (Historically, Republicans were the party of trade protection. But starting in the 80’s they realized the world had changed such that it was more beneficial for the elite to have “free trade” than “protectionism”.)

Democrats are also split. The big-money portion of the party supports existing and proposed deals (like the Trans Pacific Partnership). But the base is sufficiently hostile to all trade deals that no Democratic candidate with an expansive notion of trade deals will be viable in the near future. In the moment, the Democrats are attacking the threat of a Trump tariff war. But this is more schadenfreude at Trump’s problems with his own constituencies than any coherent policy position. In fact, as one hopes party leadership realizes, thoughtful trade pacts are an important way to prevent trade wars—so they will need to have a more proactive position when they regain a majority.

Sensible policy should start with the position recognized by virtually all experts on the topic that, on balance, increasing the amount of trade leaves America better off than restricting trade. Some of the benefits are reflected in the increased production of exports and some are reflected in lower consumer prices for some products. But it is also demonstrably the case that some people get banged up pretty badly when “free trade” proceeds willy-nilly and that a very disproportionate amount of the returns go to the investor class. Addressing these issues will difficult. For instance, if one wants to oppose tariffs because they may raise consumer prices, one also needs to keep in mind not only the costs to other Americans of keeping those prices low, but also the warping effect the mechanisms used to keep those prices low has on the distribution of American wealth. And that is before considering the impact on other countries, which sooner or later will return to haunt us. Conversely, a more protectionist policy also creates winners and losers, as well as the threat of tariff wars, which would probably have a worse impact on general welfare than the current policies.

It seems the best approach would be policy that embraces trade, but uses trade agreements in ways that achieve a better balance of the benefits. Perversely, it seems the Trump administration has somehow stumbled into an agreement that could actually have some modest benefit for both American and Mexican workers without obviously undoing whatever positives there are to a trade agreement with Mexico. However, since Trump doesn’t seem to operate from any fixed principles, it’s not clear whether he has any capability to steer this agreement through a Republican Congress—let alone whether he could ever repeat it.

But this seems exactly like the direction Democrats should be exploring—not getting rid of trade agreements, but using them to balance the benefits. In addition to real benefits, this approach touches on an area of common interest with the Trump base at a time when those are very hard to find.

3 thoughts on “What Could We Get From Trade Policy”